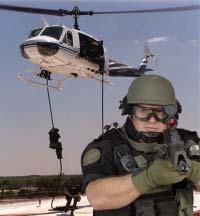 The State of Georgia SWAT team is a functional organization providing weapon and tactical expertise not normally available to troopers of the Georgia State Patrol and other law enforcement agencies. This expertise is utilized in the resolution of critical incidents in an effort to reduce the risk of injury or loss of life to citizens, police officers, and suspects.

The SWAT team provides a highly trained and skilled tactical team as a resource for all law enforcement agencies in the State of Georgia in resolving critical incidents such as barricaded subjects, and hostage situations that may occur anywhere in the State. The team is comprised of troopers who perform SWAT duty on a part-time basis. They are called upon from their duties to attend critical incidents and training and to provide support for other agencies' SWAT teams in protracted situations.

The Dive Team assists local agencies in the recovery of drowning victims, evidence or other objects that have been lost in Georgia's waterways.  All team members are fully qualified SCUBA divers with advanced training in Public Safety diving.  Much of the diving operations conducted by the Dive Team is done with the diver underwater alone, in water with almost zero visibility, extremely cold temperatures, and swift water.

The SWAT team is augmented by other Troopers specially trained in crisis negotiations. The Crisis Negotiations Team responds to critical incidents along with SWAT and aids in attempting to resolve critical incidents peacefully, through communication with suspects. These Troopers also perform their duties on a part-time basis and are an integral part of our response.